Discover the beauty of Sardinia! We have selected for you some of the most enchanting places that you can reach on board of our campers. 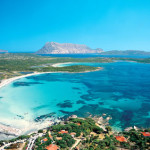 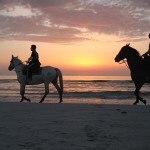 Nice village set on the south coast of the Gallura region. Since 1977 its sea and coasts have been under the control of the “Area Marina protetta di Capo Coda Cavallo” a marine reserve stretching from Capo Ceraso to Isuledda beach. Among its 18 beaches the most famous and admired are: la Cinta, Cala Lu Impostu, Cala Brandinchi and Cape Coda Cavallo.
From this latter one can observe a unique sight over the islands of Tavolara and Molara. Last but not least, Cala Girgolu with its famous rocks. Don’t miss the pond of S.Teodoro with its beautiful fauna of migrant birds. 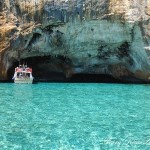 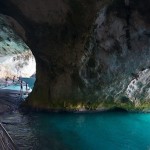 A large village and among the most interesting in Sardinia, Dorgali is the “capital” of tourismin Barbagia, thanks also to the fame of Cala Gonone: “Dorgali by the sea”. The village is set at the foot of M. Cadula Marina, a sleeping volcano and is sorrounded by magnificent calcareas mountains. Cala Gonone is famous for the fascinating sea excursions: to the Grotta del Bue Marino, wich are about 4 km from the port along the coast or to Cala Luna. Dorgali is particularly important for its artisan production and gastronomy. Its artisans produce leather products, decorated ceramics and also classical Sardinia carpets, gold and silver filigree work. Among the gastronomic products are remarkable and prestigious wines and the cheeses. 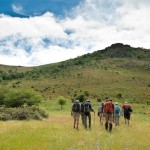 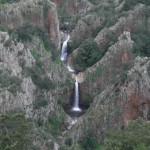 The territory of Gennargentu is harsh and fragmentised, it is a succession of montains and infrequent plateaux dissetted by precipitas valleys.
The silence is nearly always broken by the sound of the bells of sheep, cows and goats.
Shephered here, in the central and southern Barbagia still follow their ancient rhytmis of life. To the south of Gennargentu a vast barren inhabited territory can be found, which although in large part deforested, hosts a very interesting fauna (Royal and Bonelli eagles, wild bear, foxes) and flora (chestnut, thyme, santolina). 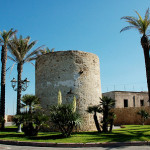 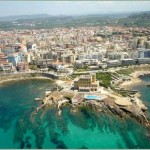 During the first years of the XII century the noble italian genoan family of the Doria established here two (of its) fotified villages: Castelsardo and Alghero.
In 1353 after a period under control of Pisa, Alghero was conquered by the aragonese troups and from then on this has been the most spanish town in Sardinia. Its inhabitans, in fact, speak a dialect of iberic origines (catalan).
As evidence of Alghero’s past we find imposing bastions and towers by  the side of the sea and the tower of Porta Terra, San Giovanni, San Giacomo and dello Sperone; la cattedrale di Santa Maria, the Misericordia church and most of all the church of S. Francesco. Very important the XVI century bastions from wich one can enjoy a wonderful view towards north: the headlands of Capo Caccia and P. Cigno. 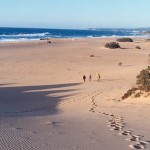 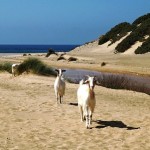 Piscinas is a small village in the Sulcis area; its origin is witnessed by many archeological sites in its territory.
The famous “Piscinas dunes” unique in all island are a real “desert” in miniature, about 3 square km in size, their shape changes costantly due to the blowing of the mistral wind.
There is also on the beach at Piscinas, the praisworthy hotel Le Dune wich has been perfectly converted from a series of old mining buildings that onces represented the Sulcis’ wealth. 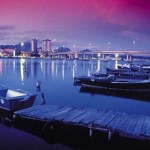 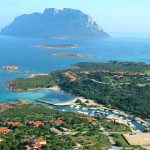 Olbia lies in a very convenient  position is in a plain around a deep and wide natural part, along the northeastern coast of Sardinia backed by a series of hills descending toward the sea.
Olbia is one of the most important passenger port in Italy; also of great importance is the “Olbia-Costa Smeralda” airport. Not far from its urban centre, evidence of its long and glorious historycan be found: the “Sa Testa”…well and the “Su Monte and S’Ape “giant tomb”.

Other important monuments are the Roman acqueduct, the Punic walls, the Romanesque San Simplicio churchand the “Castello di Pedres”, this latter testimonial of the Medieval history of the town. The territorial coast of Olbia stretches for 100 km. The area is characterized by rocky… and also by white sandy beaches large and small and crystal clear sea. Porto Rotondo and Porto Cervo, very well known capital of international tourism are on short distance. 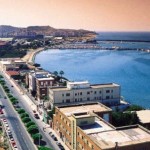 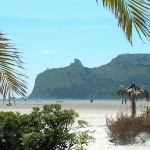 The “capital” of the island is a large and moderny city.Cagliari is in a beautiful panoramic position at the center of the gulf of the angels of gulf of Cagliari.

With its old and modern districts, dominated by various heights: the castello hill in teh center, the hill of M.Urpinu to the east and the S. Michele hill to the north.Particularly impressive localities, both for their beauty and the possibility of bathing are the Poetto beach with the nearby Capo S.Elia and the small beach of Cala Mosca. 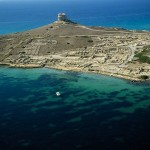 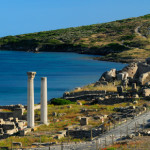 This ancient village, founded by the Phoenicians between XI and VIII century BC is situated on the headland that from sinis stretches to the south toward Capo San Marco.

The Phoenicians prefered to built their villages on peninsular lands like … of Tharros to protect their ships from storming winds. The Chartaginians used Tharros as a maritime stronghold (from VI century BC) to protect the Mediterranean sea-roads. In 238 Bc it passed under roman dominion; then between the II and III century BC it grew in importance, possibly becoming a fully-fledged colony. The Byzantines re-fortified Tharros in the VII century because of the saracene menace. It was finally abandoned in 1070. The present day excavations that brought the village to light began in 1956.